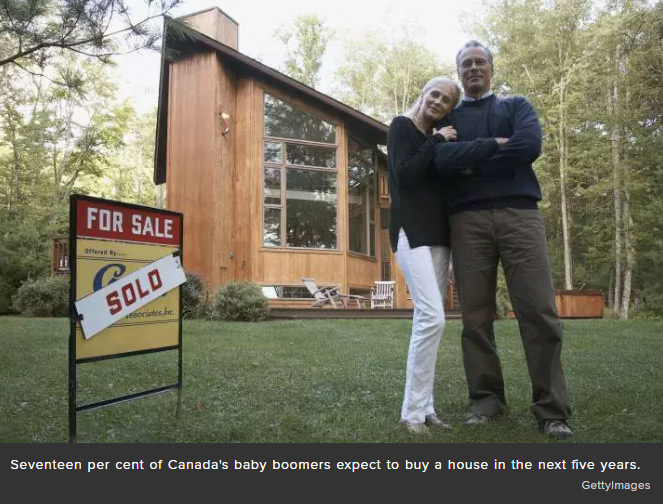 Baby boomers are back in the housing market

Baby boomers are back in the housing market – and it will impact prices: Royal LePage

More than 1.4 million Canadians between the ages of 54 and 72 expect to buy a house in the next five years, according to a new survey by real estate powerhouse Royal LePage.

Boomers will be either downsizing to smaller properties in their hometowns or looking for greener — and cheaper — pastures away from big cities, the research shows.

Either way, this is “expected to have a meaningful impact on the housing market,” the report reads. 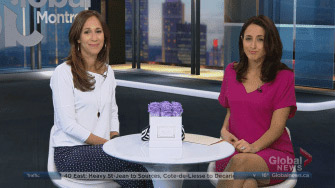 The boom happened when boomers entered the market as first-time homeowners and then upgraded to larger homes a few years later. The bust had, in part, to do with the smaller number of gen-X homebuyers. The echo kicked in when millennials, the children of the boomers, started looking for a home of their own, Soper said.

Now we may be in another real estate market commotion caused by boomers, as Canadians in or approaching retirement look for homes better suited to life after work.

In terms of home prices, “I think that there will be some relief from boomers leaving family-sized homes,” Soper said.

The main beneficiaries will likely be first-time homebuyers who are at the tail end of the millennial cohort and the much smaller generation Z. Downsizing boomers will also likely leave more space for older millennials who already own a house but are a looking to move to a bigger home as their families grow.

Still, with demand for housing expected to remain, the boomer migration to condos and small-town Canada won’t be the solution to housing affordability woes, Soper warned.

“It will bring some relief, but not enough for (home) prices to retract,” he said.

And when it comes to smaller homes and condos, downsizing boomers often become competition for young families and immigrants, helping to push prices up.

“The price appreciation curves for condos and detached homes in places like Toronto have flipped over the last couple of years,” Soper said, meaning that apartment units have been appreciating faster than single-family houses.

In particular, boomers could push up the prices of larger condos, Soper added.

This would add to price pressures generated by the stricter federal mortgage rules that came into effect this year. These rules also contributed to pushing more homebuyers toward less expensive properties like condos.

But not all boomers are prepared to spend their golden years in an apartment.

A whopping 56 per cent of those surveyed consider their local housing market unaffordable, a percentage that grows to 63 per cent in Ontario and 78 per cent in British Columbia. However, the solution for many isn’t to stay put and downsize but to move away.

Could you pass the mortgage stress test? Here’s how to find out

“Our research does indicate that smaller cities and recreational areas will attract more investment than major cities,” Soper said in a statement.

Not yet empty nesters

But boomers are likely to postpone their home purchases until the family nest is empty. The survey found that 44 per cent of respondents still have children living with them. Of those, almost 20 per cent don’t anticipate the kids will move out until after the age of 30, while nearly 10 per cent expect them to leave after the age of 35.

Perhaps partly in an effort to make that transition happen, 47 per cent of boomers say they are ready to help their children buy their first home, with 5 per cent willing to contribute 25 per cent or more of the home purchase price.

Baby boomers are the “most affluent generation in Canadian history” and they are willing to give back, Soper noted.

“This is a generation that deeply values home ownership and very much wants their children to have the same opportunity.”

Here’s the share of boomers who expect to buy a house in the next five years and the percentage of those who plan on helping their children buy a house.

Share of boomer willing to help their kids buy a house
Willing to subsidize their child’s home purchase to some extent: